Joking About Someones Food Allergy, is it ever ok?
Love Simon
February 16, 2018 No Comment 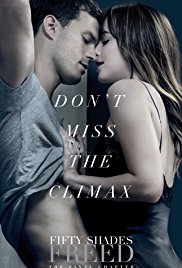 It’s the final installment diehards have been gagging for and critics have been waiting to smash! Judging by the reactions at the cinema and in print, the critics and even some diehards have done just that. I think in my book, it’s somewhat all unjustified.

Obviously the love story takes things to the next level in the third and final chapter, leading with a gorgeous wedding and what some would describe as a dream honeymoon. Cleverly featured through a montage of global jet setting, the honeymoon is speedy and gives us a taste of the grotesque wealth roller coaster your about to hop on for the next 105 minutes.

There weren’t many surprises in this film and for me, that’s a good thing. I got exactly what I was after, in fact I was delighted by the softer side of Mr Grey and watching him evolve into a relatively normal and loving partner. Although don’t misunderstand my aforementioned comments, there was still plenty of kink. In fact, I found this one a little raunchier than the second film, just not as raunchy as the first

Rita Ora featured more heavily this time around, although did little to the movie. Likewise, the introduction of some new characters seemed an unnecessary distraction from the story line except for one, Anastasia's new body guard Luke Sawyer, played by the very hunky Noel Kahn. Noel is best known for his role on Pretty Little Liars, and I assume was added to bring in a younger audience. He is smoking hot with many saying he could have played Christian. To be honest, I would have agreed until the shower scene where the real Christian, Jamie Dornan, certainly reclaims his poster boy status!

The plot itself is seemingly baseless and meanders along the lines of the other 2 films. Christian is still slightly twisted, bad guys still want to hurt them, and it all works out in the end. Also, I have to point out the fact that no one really knows what Christian does. Where did all the cash come from since he never seems to actually be at work?

The biggest change in direction for this installment has to be the new Mrs Grey played again by Dakota Johnson, taking her married role on board rather quickly. We see her exerting her authority over others, in particular her new husband who it seems no longer wears the pants (who complains about him with no pants?). I like this dimension and particularly liked her elevated style, finally looking like a billionaire’s wife and perhaps shutting up the critics claiming she wasn’t the best choice for the role.

At the risk of being a spoiler, I do have to point out the cheesy moments that were more prevalent in this film and had people laughing out loud in the cinema. Christian’s sudden interest in piano playing and serenading was one of those moments, and whilst others thought it was OTT, I personally loved it and found it the perfect rounding out of his character.

It wasn’t all love for me. The ‘action’ moments came and went so quickly, I almost left with whiplash, they seemed so unrealistic. Also, there’s a few moments where the wealth seemed like a surprise to Anna, as we see her shocked about Christian’s Jet. Or, when they order Bollinger on a school night. To me, these moments seem so off from the theme of the movie.

I loved this movie. For those that didn’t like it as much as the first two, I can only suggest they are more intrigued by depravity than the thought of as happy ending. Overall, the trilogy finished off balanced and raunchy and yet managed to nail the Pretty Woman style happy ending.