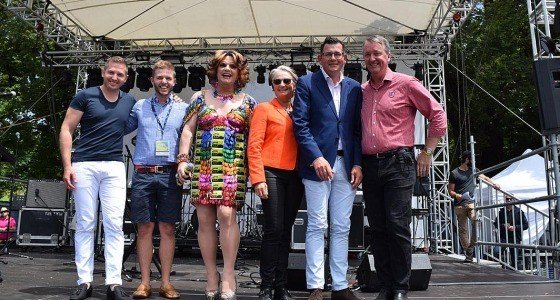 The Premier of Victoria, Daniel Andrews, officially opened Midsumma Carnival on Sunday cementing the Labor Party’s position that “equality is non-negotiable”.
The Premier spoke of delivering adoption equality, ensuring that Victorian law recognises international marriage, following through on the roll-out of the Safe Schools Coalition in all state schools, appointing a commissioner of Gender and Equality, and reversing the changes in the equal opportunity act. “Equality is not something that can be done in part. If you’re for equality then you’re for it everywhere. If you’re for inclusion and respect and decency, then you’re for it everywhere,” he said on the Carnival mainstage. “We’re going to review every act in the Victorian parliament to make sure that any ghosts of the past in terms of discrimination are written out of the statute books.” Criticised for not announcing any timelines for any of the changes, Andrews told MCV that the community could expect to hear some greater clarity on when the Government will follow through on their election platforms by the end of the festival. “We were clear about what we are going to do, and we’re going to do,” he told MCV. “I think that in politics, in life, in everything you do, to be yourself, you need to stand up for the things you believe in, and you need to fight hard for them – and that’s the approach I’ve always taken,” he said. The Premier also reminded the crowd of thousands that he is a strong advocate of equal marriage. “If you’re a proud Victorian, like I am, then you know and you understand that this is the progressive capital of the nation.” One of the actions expected to be first on the agenda will be the changes to adoption law for equality. Australia’s first Minister for Equality, Martin Foley, told MCV the laws should be straightforward to amend, however it will depend on the Opposition and minor parties. “Should the Opposition or the minor parties support that, then that will ensure that this long delayed measure of justice for rainbow families will be delivered,” he told MCV. Shadow Minister for Equality, David Davis, also spoke at Carnival addressing the crowd. View the article here