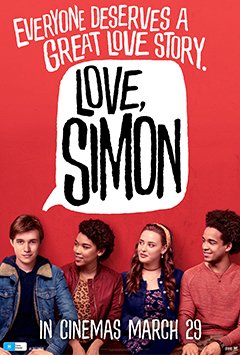 I don’t ever remember getting home from a movie and wanting to watch it immediately again. To say this film is brilliant wouldn’t do it any justice.

Love, Simon is far from what I expected. Any film based on a high schooler’s experiences and a cast of almost exclusively ‘school students’, is bound to be a teenage rom com like High School Musical, right? WRONG!

Love, Simon is a powerful and emotional roller coaster with one of the most important messages of our time. For a story line that’s prone to being a cheesy teen movie, the script and directing ensured this film is something for literally everyone.

Based on the 2015 book Simon vs. the Homo Sapiens Agenda by Becky Albertalli, Love, Simon is the story of a teenage boy who on purpose is unremarkable and just like everyone else except he has one big secret, he’s is gay.

The film explores the journey a teen goes through, keeping a secret of this magnitude and more importantly highlights (exceptionally well) the internal anguish that comes with having a secret like this and the self-acceptance required.

Nick Robinson (Jurassic World, Melissa and Joey) plays Simon and nails this role in every way. His acting is superb and intense yet never over the top. I can recall one very intense scene when Nick’s world unravels, demonstrating pain simplistically yet powerfully.

Jennifer Garner provides a stand out performance as Simon’s highly intellectual yet exceptionally down to earth and loveable mother. Jennifer will make every movie goer fall in love with this character and delivers one of the most powerful scenes in the entire film and one that anyone who has lived this story will completely relate to. Look for the exhale line in the film!

This film literally had everyone in the entire cinema in tears. However, the script was so ingenious that within a minute of starting to sob, the entire cinema was in stitches of laughter once again. Rarely does a film have this much control of the audience’s emotions.

Now it’s not all roses, the script does play on a few clichés. Once the secret is revealed it starts to capture what the real reaction would be from a school full of over-charged teenagers. Then sadly, it takes the wrong turn. Simon suddenly becomes somewhat of a hero and has the backing of the entire school which in reality is simply nowhere near the truth. Having said that, it is a movie and it did demonstrate the way we wish this story line would play out in reality.

Unlike any movie I can think of, this film left me rattled and unsettled for days after watching and having seen it a second time, it has had just as big of an impact once again. Yes, it resembled my personal story but based on the reaction of the audience, it effected everyone the same way.

I can’t see the Academy taking notice of a film like this because it will be viewed as a teen rom com, but for me personally the script, directing, and acting deserve to be up there with the best of the year. I couldn’t recommend this film more highly, regardless of your views or sexual orientation.