Dawson’s Comrade Says Her Fight Isn’t Over By a Long Shot.
6PR Interview on Cyber Bullying
February 24, 2014 No Comment 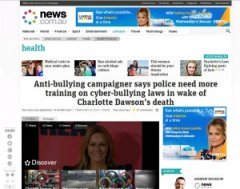 A LEADING anti-bullying campaigner says police are dismissing complaints about cyber-bullying because they’re unaware of laws already in place to deal with the problem. Speaking to news.com.au after the shocking death of Charlotte Dawson, John Caldwell is calling for more police education about the “variety of laws” already in existence. “There’s a commonwealth criminal code which covers menacing and harassing which absolutely does cover normal bullying every day and cyber bullying,” Caldwell said. “Each state has a stalking law, and that, although it wasn’t designed for bullying, absolutely covers it. So if it’s repeated, which it has to be to be called bullying anyway, it can be covered under the stalking laws.”  The problem, according to Caldwell, is that some police officers simply aren’t aware of the laws.  “There’s been little or no training at the (police) coal face,” Caldwell said.  “So when you go in to report it, the officers will usually say that there needs to be a threat present and that’s just not true. So, there needs to be more education of the police force on the coal face who are taking these reports.”  Cyber-bullying is in the spotlight after model and television personality Charlotte Dawson took her life on the weekend.  More than 28,000 people, shocked by the 47-year-old’s suicide, have signed an online petition calling on the Federal and State governments to take a stand against cyber bullying.  The petition, called Charlotte’s Law, was created on change.org and calls for “the Australian Government and the state governments to enforce the existing anti-bullying and harassment laws, and take action against those who violate them”.  “We ask that social media companies take a more active role in the prevention of cyber bullying, and take more responsibility in monitoring posts of ‘hate’. We ask that together we unite to change the cyber bullying platform,” the petition says.  Speaking on radio this morning, NSW Premier Barry O’Farrell agreed that social media companies need to lift their game and help stamp out such anti-social behaviour on their sites.  “We need to ensure, whether it’s Twitter, whether it’s Facebook or some of the other social media platforms, that those who are running them, actually understand, that if someone logs in with the same original email account or the same name, the same birthdate, having been blocked … they shouldn’t be allowed on the platform again,” O’Farrell said to Kyle and Jackie O on Kiis FM.  In the past few years, Dawson was subjected to some vile personal attacks on social media sites such as twitter.  Speaking to news.com.au in November last year, Dawson said the online taunts contributed to her mental illness which she had suffered from for a long time.  “They [trolls] think if they can cause pain then they will cause death,” Dawson said.  “I’m a good person, I help the community, and people like to hate me. I don’t know what it is, I can’t explain it … It saddens me that en masse there are that many messed up people out there.”  If you are being bullied online, John Caldwell suggests that you begin documenting the attacks so that you have evidence.  “If you’re repeatedly being bullied and this person targets you again and again, you need to name the dates and the times, then go to the police station,” Caldwell said.  “Tell them you’d like to make a report under the stalking law or under the Commonwealth criminal code for menacing and harassing, and make sure that they do take that report. By law they have to take a report when you go in with that evidence.”  Beyond Blue CEO Kate Carnell wants “tougher and more consistent laws” to stamp out cyber bullying, telling news.com.au, “there has to be clear penalties for perpetrators.”  “The dilemma with bullying is that people think they are smart or big men but it’s not. It’s cowardly. It can cause real harm and the message is that if you cause harm to a human being there should be penalties,” Carnell said.  Dawson’s death will undoubtedly remain in the headlines in the following days, but John Caldwell wants to make sure that her decision to commit suicide isn’t glamorised.  “Thousands of young kids looked up to Charlotte and idolised her,” Caldwell said on Kiis FM.  “To those children I want to say, she is still your idol but this is not the answer, it’s not the way. There are other ways and there are people out there that love you. Keep a great memory of her but this wasn’t the right way to do things.”  NSW Police were approached for comment but are yet to respond. FOR SUPPORT AND INFORMATION ABOUT SUICIDE PREVENTION, CONTACT LIFELINE ON 13 11 14 OR SUICIDE CALL BACK SERVICE ON 1300 659 467.   Source: news.com.au