Star Observer: Gay anti-bullying advocate up for Australian of the Year 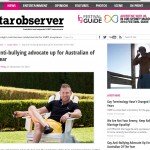 AN openly-gay anti-bullying advocate has won the Australian of the Year award for Victoria, putting him in the running to win the overall award on Australia Day next year. John Caldwell has received acclaim for his work promoting anti-bullying programs in schools, a passion stemming from his experiences being bullied as a child. “Growing up we were exceptionally poor. I was often the only kid in school without shoes, without a uniform, never ever had the right books, so I was bullied a lot for that,” he told the Star Observer.   Read more here...   Source: Star Observer