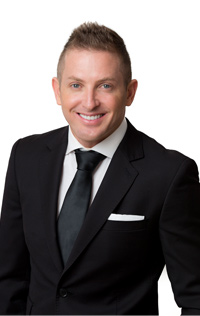 CEO | MEDIA PERSONALITY | AUSTRALIAN OF THE YEAR 2014 IN VICTORIA | AUTHOR

John Caldwell is an Australian who was raised in caravan parks by parents whose lives were a cycle of violence, alcohol and promiscuous sex. John was bullied at school, abused by foster parents, and was present when his father killed himself with a shotgun in the family caravan.

Against his family’s expectations he rose above this nightmarish childhood. Leaving school at 15 with no qualifications, John was determined to make something of himself and he quickly realised that retail and hospitality was the best avenue to propel him to success.

Progressing from an entry level role, through support office he took a number of posts including Training Manager and State Operations Manager. By 21, John owned two fast food franchises and won the Franchise Store of the Year award and was globally recognised as a Top Franchisee. Continuing in the industry, he worked within fashion in HR, Operations and General Management functions.

All the time he concealed from colleagues and friends that he was gay.

John’s experience, drive and entrepreneurialism led him to set up Retailworld, RWR Executive and Hospoworld in Australia. He now actively works to position the retail and hospitality industries as a career of choice and partners with businesses to work on their employment brand and a strategy to increase the overall talent pool.

John’s strategic approach and ability to act quickly to market trends and opportunities has led to 16 offices across the RWR Group in New Zealand, Australia and the United Kingdom. He has shaped detailed growth plans for expansion both nationally and internationally. Along with the day-to-day running of his business, John also sits on advisory boards for both Global retail giants and new retail concepts.

In more recent times John has explored his childhood passion for drama and creativity through TV and film production. John is also an entertainment correspondent for KIIS FM. Take a look around the site for a taster!

JC is well known for his philanthropic work that earned him the title of Australian of the Year in Victoria. Working internationally on his cause led to his role as a social commentator across various media outlets. After interviewing some of the biggest names on the planet such as Kim Kardashian and Angelina Jolie, JC naturally transitioned into the world of entertainment. He is now the Entertainment Report for KIIS FM, Australia's leading radio station. You can hear his latest segments on SoundCloud or by visiting www.johnmcaldwell.com/blog/

Addressing a range of current affairs and social issues with the panel, John presents a regular ‘Daily Dilemma’ as well other lifestyle segments.

Tune in to Studio 10 to see John’s work, or check out his recent, and often controversial segments, at http://www.johnmcaldwell.com/blog/

Australian of the Year 2014 in Victoria

John has been recognised for his work as an anti-bullying campaigner. The Australian of the Year Award celebrates the achievement and contribution of eminent Australians by profiling leading citizens who are roles models. They select people who inspire through their achievements and challenge people to make their own contribution to creating a better Australia.

John is an anti-bullying advocate and an Ambassador for the Alannah and Madeline Foundation. He campaigns to spread the anti-bullying message on a global scale. He is actively involved with communities on all levels, from schools to universities doing research into the epidemic as well as groups lobbying to government.

Making impact internationally, John is taking the message to all corners of the globe, being relied on as the link with overseas charities such as The Trevor Project in the USA and the Anti-Bullying Alliance in the UK.

As a victim of bullying throughout his childhood, John is passionate about educating youth on the affect a bully can have on a person. Speaking through his own journey, he presents to large groups with an anti-suicide message – proving that you can come out the other side stronger than ever.

John released a book, Full Throttle (www.fullthrottlebook.com), in 2013 which revealed his upbringing and the emotions he experienced that have led him to work tirelessly to spread the anti-bullying message.

After being Midsumma Festival Champion, John joined Midsumma as a board member in 2015, and was then electedChairman.

Midsumma is a Melbourne based organisation with an annual festival celebrating the LGBTIQ community. It is now one of the top 5 festivals in the world, and includes a wide variety of arts and cultural events.

John and the board have recently presented a world class program for their 30th anniversary, allowing organisations and individuals to show their pride.